‘Waves of Fiction’ with AusLit

A few years ago, I met with Catriona Mills, to ask her advice about applying for a Fellowship with a film archive. After a lovely conversation, we had decided to work on a project together instead, with AustLit. And so, Waves of Fiction was created.

AustLit is a database of Australian literature and storytelling that lists comprehensive information on works about Australia or by Australians. As well as referencing the works, AustLit links relevant biographical and bibliographical and historical information, full text, exhibitions, and rich online content. AustLit uses a broad definition of ‘the literary’, covering all forms of storytelling, including literature, stories, poetry, scripts, memoirs, reviews, and more. It is a true treasure trove that is easy to get lost in. 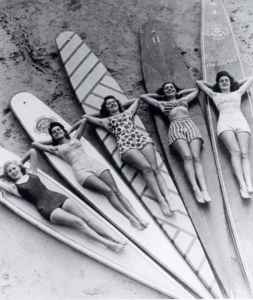 Catriona is well versed in Australian literature, as well as the volume of AustLit, and she helped me consider the scope of the forms of wave riding that were to be included. I decided on an expansive definition, that includes surfboards, body during and body boarding, but not kite surfing, wind surfing, or surf boats. Even with this expansive definition, neither of us were ready for the scope of the works that would come to be included – to date, there are 680 works.

Another thing that stood out quickly was the diversity of the forms of works. How we’ve come to know surfing is often linked with surf magazines and films, and we rarely consider how commonly surfing appears throughout Australian literature. While Tim Winton’s books and Gabrielle Carey and Kathy Lette’s story, Puberty Blues, have come to be the fiction most commonly associated with surfing, there is a much longer history that includes diverse genres, forms, characters and authors. Yet we know little of that collective body of work, nor what new things it can tell us about surfing, which, although so prolific in our coastal lives, remains little understood, even by surfers themselves. As it is, there are numerous poems, as well as young adult and children’s books that feature surfing. Surf magazines are there, but they are not all there is. 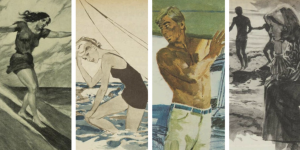 There is much else to be surprised by, not least the year of publication of the earliest entry, ‘The song of the surf’ by Adam Lindsay Gordon, which is a poem published in 1867, a date that well precedes the infamous surfing exhibition of Duke Kahanamoku in 1915. Many of the early works are about or by women, and that one story from 1911 includes an illustration of a woman surfing by famous Australian artist, Norman Lindsay. The woman in the illustration is muscled, strong and capable, flying along the wave face on a long wooden board. These turn of the century representations of women as capable ocean surfers adds more evidence in the case against the tired argument that “girls didn’t surf”, which has been used to justify their exclusion from contests and unequal prize money until recent years.

The best thing about this dataset, is that it is there for anyone to explore and to work with, so if you’re interested in surf literature, please dive in and see what you can find.

By uqrolivePublished On: March 20, 2020Categories: Uncategorized

This website uses cookies to improve your experience while you navigate through the website. Out of these, the cookies that are categorized as necessary are stored on your browser as they are essential for the working of basic functionalities of the website. We also use third-party cookies that help us analyze and understand how you use this website. These cookies will be stored in your browser only with your consent. You also have the option to opt-out of these cookies. But opting out of some of these cookies may affect your browsing experience.
Necessary Always Enabled
Necessary cookies are absolutely essential for the website to function properly. These cookies ensure basic functionalities and security features of the website, anonymously.
Functional
Functional cookies help to perform certain functionalities like sharing the content of the website on social media platforms, collect feedbacks, and other third-party features.
Performance
Performance cookies are used to understand and analyze the key performance indexes of the website which helps in delivering a better user experience for the visitors.
Analytics
Analytical cookies are used to understand how visitors interact with the website. These cookies help provide information on metrics the number of visitors, bounce rate, traffic source, etc.
Advertisement
Advertisement cookies are used to provide visitors with relevant ads and marketing campaigns. These cookies track visitors across websites and collect information to provide customized ads.
Others
Other uncategorized cookies are those that are being analyzed and have not been classified into a category as yet.
SAVE & ACCEPT

Moving Oceans is based on custodial lands of Jagera and Turrbal people. We pay our respects to traditional owners of these lands, past, present and emerging. We recognise their ancestral, cultural and spiritual connections to Country and acknowledge their sovereignty was never ceded.
Holler Box
Go to Top