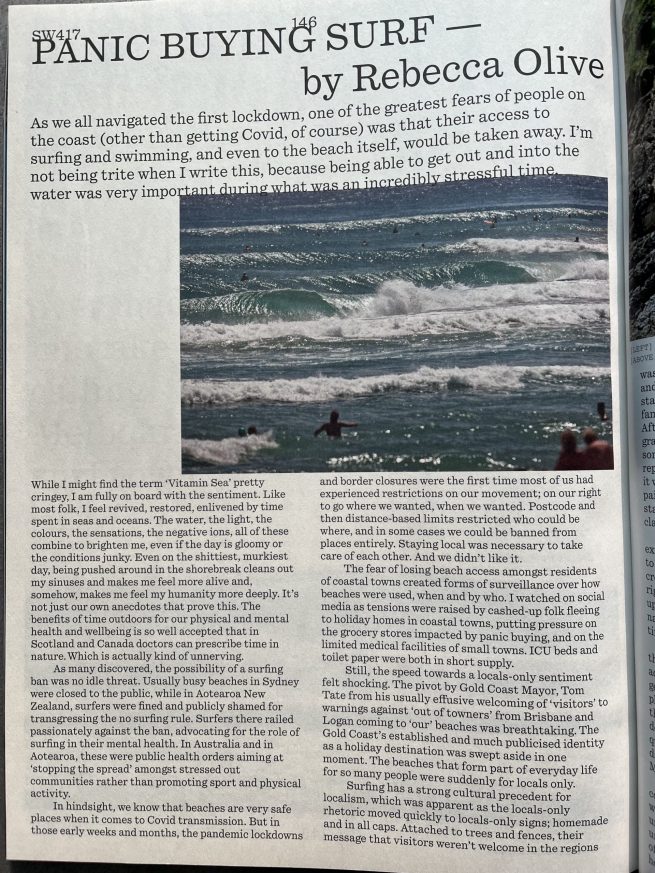 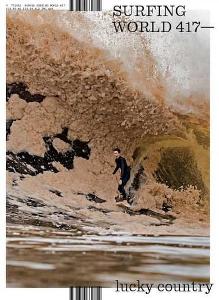 I wrote this piece on surfing and covid lockdowns in Australia for Surfing World (417). SW is a really beautiful print magazine that is a labour of passion; you can buy all their issues online. Thanks to Sean Doherty and Jon Frank for their work on this magazine and for including me.

(This article connects with some research I did with colleagues, which you can read online: Wheaton, B., Waiti, J. T. A., Olive, R., & Kearns, R. (2021). Coastal communities, leisure and wellbeing: Advancing a trans-disciplinary agenda for understanding ocean-human relationships in Aotearoa New Zealand. International Journal of Environmental Research and Public Health, 18(2), 450.)

As we all navigated the first lockdown, one of the greatest fears of people on the coast (other than getting covid, of course) was that their access to surfing and swimming, and even to the beach itself, would be taken away. I’m not being trite when I write this, because being able to get out and into the water was very important during what was an incredibly stressful time.

While I might find the term ‘Vitamin Sea’ pretty cringey, I am fully on board with the sentiment. Like most folk, I feel revived, restored, enlivened by time spent in seas and oceans. The water, the light, the colours, the sensations, the negative ions, all of these combine to brighten me, even if the day is gloomy or the conditions junky. Even on the shittest, murkiest day, being pushed around in the shorebreak cleans out my sinuses and makes me feel more alive and, somehow, makes me feel my humanity more deeply. It’s not just our own anecdotes that prove this. The benefits of time outdoors for out physical and mental health and wellbeing is so well accepted that in Scotland and Canada doctors can prescribe time in nature. Which is actually kind of unnerving.

As many discovered, the possibility of a surfing ban was no idle threat. Usually busy beaches in Sydney were closed to the public, while in Aotearoa New Zealand, surfers were fined and publicly shamed for transgressing the no surfing rule. Surfers there railed passionately against the ban, advocating for the role of surfing in their mental health. In Australia and in Aotearoa, these were public health orders aiming at ‘stopping the spread’ amongst stressed out communities rather than promoting sport and physical activity.

In hindsight, we know that beaches are very safe places when it comes to covid transmission. But in those early weeks and months, the pandemic lockdowns and border closures were the first time most of us had experienced restrictions on our movement; on our right to go where we wanted, when we wanted. Postcode and then distance-based limits restricted who could be where, and in some cases we could be banned from places entirely. Staying local was necessary to take care of each other. And we didn’t like it.

The fear of losing beach access amongst residents of coastal towns created forms of surveillance over how beaches were used, when and by who. I watched on social media as tensions were raised by cashed up folk fleeing to holiday homes in coastal towns, putting pressure on the grocery stores impacted by panic buying, and on the limited medical facilities of small towns. ICU beds and toilet paper were both in short supply.

Still, the speed towards a locals only sentiment felt shocking. The pivot by Gold Coast Mayor, Tom Tate, from his usually effusive welcoming of ‘visitors’ to warnings against ‘out of towners’ from Brisbane and Logan coming to ‘our’ beaches was breathtaking. The Gold Coast’s established and much publicised identity as a holiday destination was swept aside in one moment. The beaches that form part of everyday life for so many people were suddenly for locals only.

Surfing has a strong cultural precedent for localism, which was apparent as the locals only rhetoric moved quickly to locals only signs; homemade and in all caps. Attached to trees and fences, their message that visitors weren’t welcome in the regions was broadcast far and wide through social media posts and national news stories. Unfamiliar cars with out-of-state number plates were vandalised, with the most famous example being a shit-smearing statement. After years of it washing away, the ‘Locals Only!’ graffiti was repainted on the rocks at The Pass. Then someone painted over it in black, then someone repainted the words in bright yellow, and so it seemed it would go on. Finally, someone ended the argument by painting the Aboriginal flag across it all, which has stayed there, reminding us all of the thinness of our claims of belonging.

Like it did with so many things, covid amplified existing issues and tensions, in this case, those related to wealth inequalities, gentrification, localism, and crowds. The politics of belonging, of entitlement, of rights, access and authority, and then amp the tension up again once you add in the importance of time in nature-spaces for health and wellbeing. It was a tinderbox of emotion.

Because at the same time as locals were regulating their towns, they were gleefully posting about their access to the beach and the great waves they were getting while no one could visit. In cities the stay-in-place orders were often grim when it came to accessing the outdoors – staying in place in an apartment in a densely urban or suburban area for months on end is quite a different challenge to being in proximity to a daily beach walk or surf. I’m thinking particularly of Melbourne, but this was true for folk across cities.

When the cities opened up again folk flocked to the coasts. After months of no visitors, surfers and beach walkers were irritated at the influx of crowds. I can understand that, I really can. But what I can’t understand is the willingness to advocate for the role of coasts in our health, but the lack of generosity about how it might be good for the health of others.

It makes me think of a day many years ago, when I still lived on the coast and was indulging in a late afternoon surf. It was a period of flatness, but there was one little peak that was sort of working in the sense that wobbly waves would come through, and the crew of us there would take turns getting them. It worked well until a friend of mine paddled out. He paddled out with a snarling face, and he took every single wave. He was the most skilled person out there and still he surfed like we were competing with him. He was awful. ‘What are you doing?’ I asked him. ‘I had stuff on this morning so this is my only surf today and I need to get waves because I’m stressed’. This person surfs twice a day, almost every day, and yet it isn’t enough. On that day I saw that the more waves people get, the more waves they think they need.

Being in the ocean is good for us. But it’s unhealthy to link our sense of wellbeing to one thing at the expense of other people.

When I finally made it down the coast to see friends and family it was with trepidation. Given the rumours, I was worried how my Queensland number plates might be received. Of course, it was okay and everyone was fine. But to be honest I’ve mostly been swimming and am a bit ashamed to admit I haven’t really returned to surfing. Unlike the ideal, I don’t like surfing alone so much as I like surfing with others. I like the company and the chat; I like watching people get waves. But in the lineups I’ve surfed these last two years there’s been a new kind of desperation for waves that isn’t much of a pleasure to be around. This desperation is from locals, but it’s from visitors too.

After fires and pandemic and floods and wars and domestic violence crises and an upcoming Federal election, maybe we’re just all scared for ourselves are panic buying, hoarding time in the sea.