‘Connection is key when there’s no planet B’ 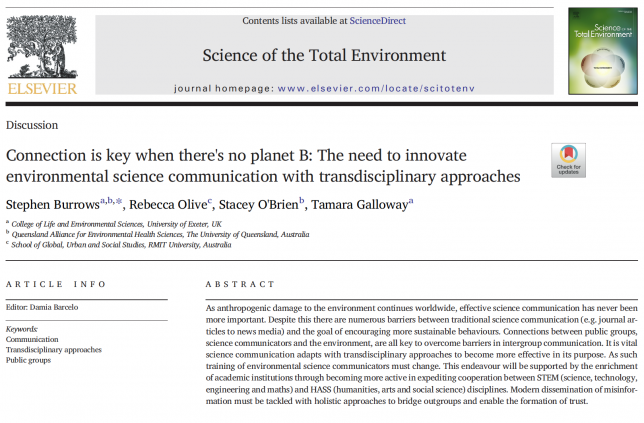 When we think about people doing research, we can quickly arrive at some classic tropes: a humanities scholar alone in a book-lined office or lab scientists with their eyes stuck to microscopes or environmental scientists collecting samples in the field with a notebook and binoculars. These tropes abide because there is much in them that is true, with humanities and social sciences researchers (HASS) and science, technologies, engineering, and math researchers (STEM) seemingly occupying different worlds. Often the work we do is grounded in similar politics but it’s usual that the knowledge produced by STEM disciplines and their scientific, quantitative methods is more respected and trusted by governments and the public than knowledge produced by HASS researchers with qualitative, people focused and relational methodologies.

However, the distinctions between these fields are changing.

With the vast resources afforded by online technologies and easier mobilities, the focus of contemporary environmental research is much more expansive, interconnected and engaged with complex problems like mass extinctions, plastics pollution and rising oceans, no one of which can be solved by science alone. Issues of toxicity, dispersal and chemical makeup are entangled with politics of social, economic, colonial, and other injustices across human and multispecies communities. Scientists know this as well as philosophers, and so there is increasing collaboration by STEM and HASS researchers who are drawing on each other’s conceptual and methodological insights.

This includes in how scientists are communicating their research.

Despite its rigour, it is clear that science alone is not enough to address complex environmental issues and is no longer being taken seriously by governments. This issue has been in the news recently. In their article, ‘The tragedy of climate change science‘, social science Professors, Bruce Glavovic, Tim Smith, and Iain White argue that until governments start to listen to the findings of environmental scientists, we should stop funding work on climate change because it is a waste of time and money, and it violates ‘the science-society contract’. [Note that you can read a more accessible version of the article here in The Conversation].

‘Climate change science is settled to the point of global consensus. We have fulfilled our responsibility to provide robust knowledge. We now need to stop research in those areas where we are simply documenting global warming and maladaptation, and focus instead on exposing and renegotiating the broken science-society contract. … We call for a moratorium on climate change research until governments are willing to fulfil their responsibilities in good faith and urgently mobilize coordinated action from the local to global levels.’

As the authors recognise, this option is ‘unpalatable’ to researchers, governments and publics alike. Yet, while it seems like an option that relinquishes hope, it is actually a proposal of radical hope that believes governments can still ultimately make decisions that benefit human-environmental health. In our global system, governments at all levels are essential in meaningful, structural change, so the authors’ frustration at their collective inaction is understandable. However, since democratic governments are meant to follow the lead of their populations, activating communities to vote for and call for meaningful environmental action is another option.

Recently, I’ve been working with marine and environmental scientists who work on microplastic pollution. (I’ve written about the wonderful folk of the UQ QAEHS lab before.) Led by brilliant PhD student, Stephen Burrows, myself, Stacey O’Brien and Professor Tamara Galloway worked on a piece advocating for another option, which is for greater multi and interdisciplinary collaboration across STEM and HASS disciplines towards more engaging, effective and compelling science communication. You can read our article, ‘Connection is key when there’s no planet B: The need to innovate environmental science communication with transdisciplinary approaches’ here in the journal ‘Science of the Total Environment’. [Note: It is currently free to download, but please get in touch if you are having trouble.]

Effective science communication is a set of skills that STEM researchers have not historically excelled at. There are examples of exceptional and moving science communicators – Carl Sagan, Rachel Carson, David Attenborough, Sylvia Earle, and Brian Cox are famous examples – but for most scientists, there has remained a belief that the rigour of the science itself is compelling enough. Also, they often do not have the time to develop the skills to communicate with the kinds of connective ways that are at the core of practice-led art, literary, and music scholarship. 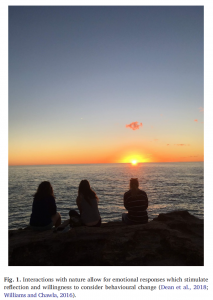 In our discussion, we argue that we need to break down the kinds of barriers to scientific knowledge that make it seem like something inaccessible to diverse publics. Instead, we suggest that scientists consider ways to connect with people, to bring them into the projects, and to share knowledge in new ways. For all of us, films, comics, novels, photographs, walking tours, or swimming in the ocean are much more compelling ways of learning about different issues than reading complex academic texts.

We offer a number of examples of where this is being done in the environmental sciences, such as bird watching projects, CoastSnap beach monitoring, and the Surfers Against Sewage, ‘Safer Rivers & Seas‘, reporting app. These are excellent examples of how data collection methods can be developed to connect with people who are already engaging in practices that bring them into contact with the very issues that are being researched. Such projects might compromise on their methodology, but the outcomes in all cases are inspiring and effective. They are effective because they connect across research approaches, and include both social and cultural considerations and good design.

It was a lot of fun to work on this publication with the other authors, in particular Stephen, whose commitment to reading broadly and considering other ways of knowing is a model of the very arguments we have been making.

I will finish here with the conclusion in our paper:

‘Effective collaboration and understanding across disciplines is difficult, but difficulty is no excuse for inaction. We must ‘stay with the trouble’ in order to encourage more sustainable stewardship of our increasingly vulnerable world (Haraway, ‘Staying with the Trouble’, 2016).

In a modern world wary of “fake news” and the increasing distribution of misinformation, we need holistic approaches to science communication in order to encourage environmental action.’